To Live and Love 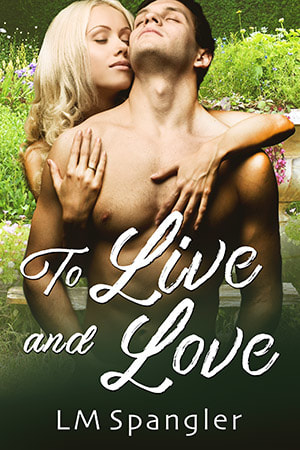 Can he show her the world like she's never seen it before?
Melanie "Mel" Caldwell has everything she could want, except for one thing—a life outside her house. An incident that occurred when she was four years old left her an agoraphobic—a prisoner within the sanctuary of her home. Besides her sister, she finds companionship in the form of handsome delivery man Justin Eberley.
The woman of Justin's dreams won't even leave her house, but that does little to tamper his feelings toward her. He finds himself wanting to deliver more and more packages to her house and help her break down the walls she's built around herself. When she invites him over for a home-cooked meal, he jumps at the opportunity to spend more time with her, although he's fully aware that any relationship between them will come with its own unique set of challenges.
One night will change both of their lives. Will they find love in the first blooms of spring, or will they let their love slip away?

​“She’s not well.”
“What do you mean? Does she have cancer or something?”
“No. Agoraphobia.”
“Agora-what? Can you say that in plain English?”
Sam laughed. “She fears leaving her home. Mel hasn’t been out of the house in many, many years. You’ll be delivering a lot of packages to her as I believe she shops exclusively online.”
“Really? I can’t imagine never leaving my house. How does one survive a life like that?” Justin removed his hat and rubbed a hand over his buzz cut hair. “It shouldn’t be humanly possible.”
“Trust me, it is. She’s a remarkable woman though considering. Mel is lively and quick to laugh or smile. You wouldn’t think she was afflicted with such a serious problem. Just don’t ask Mel to leave her front porch, because it’ll never happen.”
Justin shook his head sadly, completely unable to fathom how anyone could live like that. Sure, he hung around his apartment a lot, but he also went out for drinks with his buddies whenever the opportunity arose, went to work every day, and lived his life. He couldn’t imagine what this woman did as living.
“Buck up, Eberley. She’s a good woman. You’ll like her,” Sam said.
“Sure I will.” Justin didn’t bother to hide the sarcasm in his voice. How could he like a woman who was too afraid of the outside world to even leave her house? In his opinion, that was the cowardly way to do things.
Sam’s deep laughter boomed around the delivery truck. “You’d be surprised. That’s all I’m going to say.”
“Ooookaaay,” Justin replied skeptically. Seeing is believing.
Five minutes later Justin believed it. Before him, standing at her front door, was a stunningly beautiful woman. Though short in stature, she had the most seductive curves. And that was just the body. Mel’s face was that of an angel. Smooth, creamy skin beckoned to be stroked by a loving fingertip. Full lips bid to be kissed. Beguiling green eyes lured him into their liquid depths.
She was the complete package.
“Hi, Sam,” Mel said in a voice so seductive it rivaled that of a siren who lured sailors to an untimely end. “Is this your replacement?”
Mel smiled and Justin’s knees weakened. It took a Herculean effort for them to support his weight.
“Yes, it is. Mel, this is Justin Eberley,” Sam said.
“It’s a pleasure to meet you.” She offered her hand.
Justin took the much smaller hand in his. “The pleasure’s all mine, ma’am.”
“Please, call me Mel. Would you care to step in for a drink?”
“Don’t have time. Need to get the truck back to the distribution center so I can show the rookie how we close out the day,” Sam said as he handed Mel her package.
She accepted the parcel and laid it on the floor. “Thanks, Sam. I’m going to miss you, you old coot.”
Sam opened his arms. Mel stepped into the embrace, and Justin suddenly wished he were in Sam’s position. He wondered how she would feel in his arms. The woman elicited such a primal response in him.
Sam released her. “I’m going to miss you too. The newbie will take good care of you and your deliveries.”
“I’m sure he will. You guys drive safe.”
“Have a good day, Mel. It was a pleasure to meet you, and I’m sure we’ll be seeing each other again,” Justin stated with a friendly tip of his hat.
He and Sam ambled to the truck. When inside, Justin unleashed a whistle. “She is gorgeous.”
Sam’s laughter once again echoed in the small confines of the truck. “Told you.”
“I’m glad that one’s single.”
“If you pursue her, then you have to tread carefully. She’s damaged. Remember, Mel won’t leave the house.”
I bet I can get her to come out of her shell.